Top 5 Pakistani Batsmen And Their Claim to Fame! 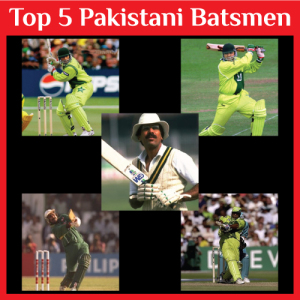 As Pakistan steps into Cricket World Cup 2015, Bi Wi takes a look into the 5 best Pakistani batsmen in history of cricket:

1.    Javed Miandad
Javed Miandad is one player in history of Pakistani cricket who could turn the game with his impeccable batting style. Remember that famous six of Sharjah when he was batting on 110 and Pakistan needed 4 runs on the last ball. It was his brilliant knock that got Pakistan a historic victory against arch rival India. He was a strokemaker who kept the scoreboard ticking with ones and twos. Javed Miandad is the leading Pakistani run scorer in Test cricket and has scored 8832 runs in 124 tests that include 24 tons and 6 double tons with an average that never receded below 50. On the other hand, he has scored 7381 runs in 233 ODIs with an average of 41.70, including 7 tons.

2.    Zaheer Abbas
Termed as “Run Machine”, Zaheer Abbas was a gifted batsman who was known for his excellent footwork. The batsman is known as a strong hitter of the ball and brought the best of his batting skills in ODI where he had a strike rate of 84. Zaheer Abbas had the advantage of his height that helped him play shots at will. He has scored 5062 runs in 78 tests including 12 tons. In ODIs, he scored 2572 runs with 7 tons. He was a specialist in one-day format where he averaged 47.62 in just 60 ODIs.

3.    Saeed Anwar
One of the most stylish batsmen in ODI, Saeed Anwar was a treat to watch. He was the next best hitter of the ball after Zaheer Abbas. Saeed Anwar had a knack to timing the ball that no one had in history of Pakistani cricket. He was particularly known for playing square-drive that later became his signature shot. Saeed Anwar was an ODI specialist who made 8824 runs in 247 ODIs with an average of 39.21. His 194 knock against India is still considered among the best performances in ODI. He has a decent record in test as well where he scored 4052 runs in just 55 tests at an average of 45.52. He holds the record for most tons in ODI by a Pakistani batsman.

4.    Inzamam-Ul-Haq
Inzamam-Ul-Haq is considered as among the best batsmen in history of cricket. He has scored more runs than any other Pakistani batsman in ODI and second most in Test after the great Javed Miandad. Inzamam Ul Haq is particularly known for his rapid footwork and timing. He is known for picking the length of the ball that helped him in executing pull and hook shots. Inzamam Ul Haq is currently the leading run scorer in One Day Internationals with 11739 runs in 378 that included 10 tons. He made 8830 runs in 120 Test matches with 25 centuries, including his historic 329 against New Zealand.

5.    Mohammad Yousuf
Mohammad Yousuf is another great Pakistani batsman who earned his name in both formats of cricket. He was particularly good in the Test matches where hold several records for Pakistan. He is the fourth leading run scorer for Pakistan in Test cricket. He also holds the record for most runs in a calendar year by any batsman in history of Test cricket. Mohammad Yousuf scored 7530 runs in 90 Tests, averaging 52.29 with 24 tons and 4 double tons. He made 9720 runs in 288 ODIs with an average of 41.71 including 15 tons. He was declared Wisden cricketer for the year 2007. His nine centuries in a calendar year is a feat that has not been achieved before.

More from my site

Ali Velshi reports on the $314 billion space economy that's predicted to double by 2030
prev next
Copyrights © 2014 .All Rights Reserved.